Why Your Concert Photos Suck

Ok, that’s pretty rough.  But so is concert photography, am I right?

Catching the right moments during a concert is a lot harder than most people realize.  Between the unpredictable lighting and some random audience member stepping right in front of your camera just as you finally found a good composition, it’s a real challenge!  Many photographers and concert-enthusiasts leave the performance with little show for it on their camera or their cellphone.

While I am a big believer in living-in-the-moment and not holding a camera or a cellphone in front fo your face during an entire concert, sometimes you just have to take a photo!  And if you know how to do it right, you’ll be able to capture it quickly and then get right back to enjoying the show.  Here are some tips that will help you improve your concert photos whether you are trying to get into the industry as a pro or just wanting to have better memories to share on social media.

1.  Change Your Point of View

We’ve all seen concert photos from the audience’s perspective.  Why not look for a different place to set up your shot?

Well, for one thing, not every venue will allow it.  You’re going to want to be careful with this tip because the last thing you want to do is get kicked out or make it harder for other photographers to be welcomed in the venue.  But let’s assume this is a cool venue with relaxed rules for photographers (such as all of the venues I’ve ever shot at)!  Look for ways you can get behind the stage, or shoot down at the band, or shoot from all the way across the room and show the band in context with the crowd.

Getting an unexpected view of the action will make everyone think you are a photography ninja!  And if you happen to capture the drummer, he/she will love you forever because they always get left out.

2.  Play with Your Shutter Speed

Your shutter speed controls how long your camera’s shutter is open.  This effects the brightness of your image as well as whether or not your image will have motion blur!

If the venue will allow flash, you can try a technique called shutter drag to create a really killer look.  By slowing your shutter down and moving the camera slightly while the shutter is open, you’ll create these interesting light trails.  Any light being read by the camera while the shutter is open will come across in this trippy, magical way!  In the image above, my shutter was open open for 1/5 of a second.   I had a flash to the right of the camera that helped to freeze the guitar player’s face.  With the correct settings, flash will freeze motion and everything not touched by the flash will have motion blur.  Pretty cool!  You can try this without flash and you’ll have varying degrees of success but for best results, use flash.  But be sure to ASK the band and the venue for permission before firing off a flash!

Typically, when your concert photos aren’t turning out as sharp as you’d like, it is because your shutter if too slow and you don’t have any flash to use to freeze motion.  If I’m not trying to create light trails, I will usually keep my shutter speed around 1/200 of a second to prevent motion blur.  But having your shutter speed set that fast means you’re not going to get much light in your camera and your images will be dark.  How can that be fixed? 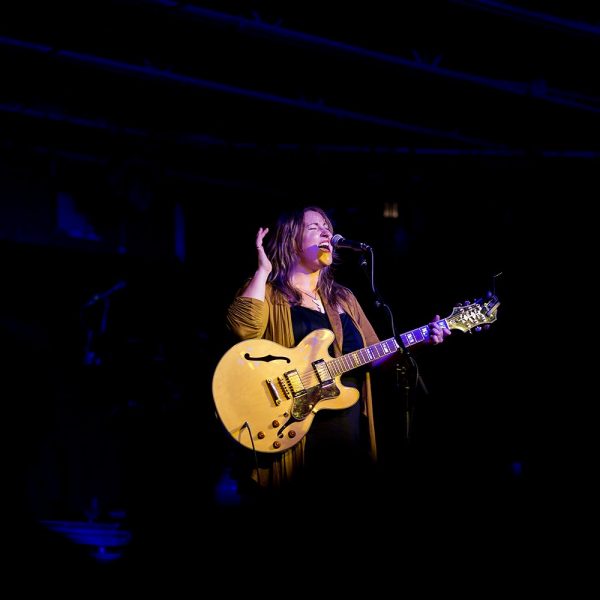 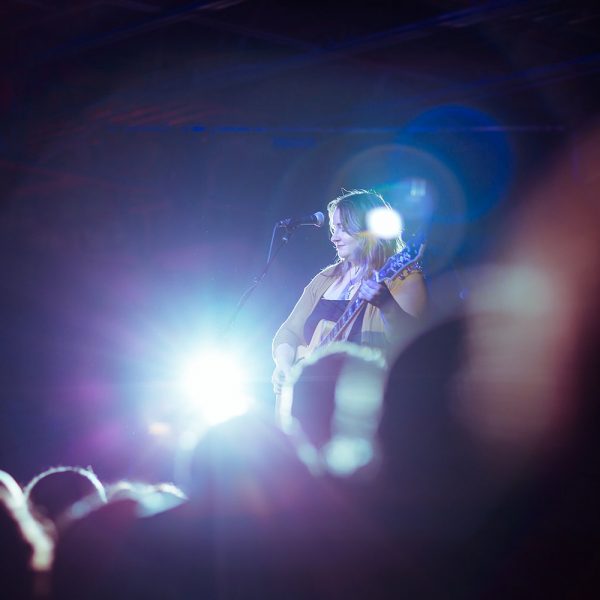 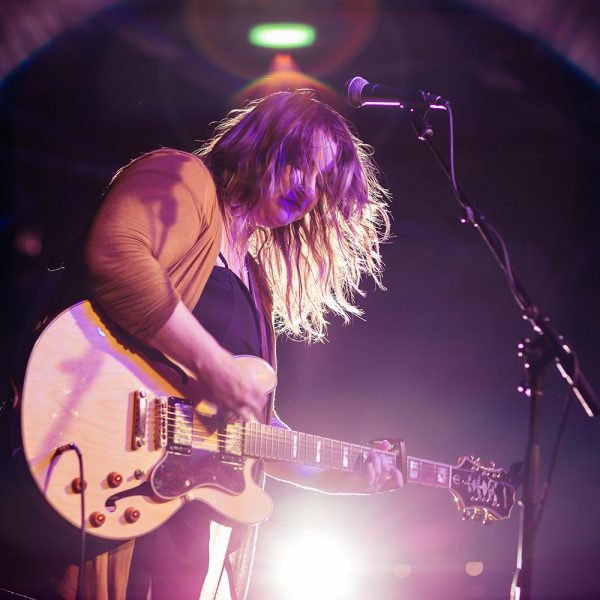 3.  Get More Light in Your Camera

Not all venues are blessed with good lighting.  Even the good ones sometimes simply use minimal lighting making it hard for you to get properly exposed photos.

There are a few ways to get more light to your camera’s sensor at a concert.  Understanding the exposure triangle and knowing how to adjust your ISO, Aperture, and Shutter Speed to get a proper exposure is key to photography.  If you have a camera body that can handle high ISO with little grain, crank that bad boy up as high as you can and reduce the noise in post-production!  If you have a lens that opens wider than f/2.8, that will be your best friend at a concert.  My widest lens is an 85mm f/1.2 lens and while it is very slow at focusing, it handles low light like it’s nothing and it is sharp as a tack!

Now sometimes, you can physically add more light to your concert photos by introducing  flash.  The most important thing about using flash at a concert is to get permission before you use it, both from the performer on stage and from the venue itself.  You will get kicked out of a venue so fast if you don’t ASK before firing off a flash.  Also, if your camera only has a pop-up flash, it probably won’t do much to add to the look of the photos.  Try an off-camera flash or a detachable flash unit for more power and control.

Check out the three images above of Kyle Anne performing at The Ranch.  When I arrived to capture her performance photos, I realized only a purple and a yellow light were turned on her and that the rest of the stage was pitch black.  I took the first photo (see above) and knew immediately that there needed to be more light behind her to separate her from the background.  I checked in with the stage manager and he approved my flashes so I set up two Godox Ad2000s with MagMod Grids to control the light spill and pointed them at her from the back of the stage.  I kept the lights low so they wouldn’t be very visible from the crowd’s prospecting and fired them at their lowest power (1/128) so they wouldn’t be very bright.

What a difference a little extra light makes!

4.  Shoot Through Prisms (and other stuff)

I never shoot a concert without breaking out some weird object to put in front of my lens.

Using clear or semi-transparent objects as light shapers is a powerful but tricky way to enhance your concert photos.  They can do unpredictable things to the lighting but when it works, it REALLY WORKS.  For this image, I used a simple prism held right up on my lens at the very top of the glass, and it stretched the lights behind the singer to create these really cool beams.

There only rule of thumb I can give you for how to make this effect work for you is:  make sure there is some sort of light behind your subject directed at your camera.  A hard light source works best – this won’t work as well if you are shooting a concert outdoors on an overcast day.  Also, try not to let the object or the refracted/reflected light obscure the person’s face.  I can tell you honestly it takes me about 10 clicks to get a good photos using this technique because you have to land the effect just right otherwise it looks like you made a mistake!

Other objects I use besides a prism:  little crystal dangly things from chandeliers, a round copper plumbing pipe, MagMod Color Gels, fairy lights, beer bottles, etc. 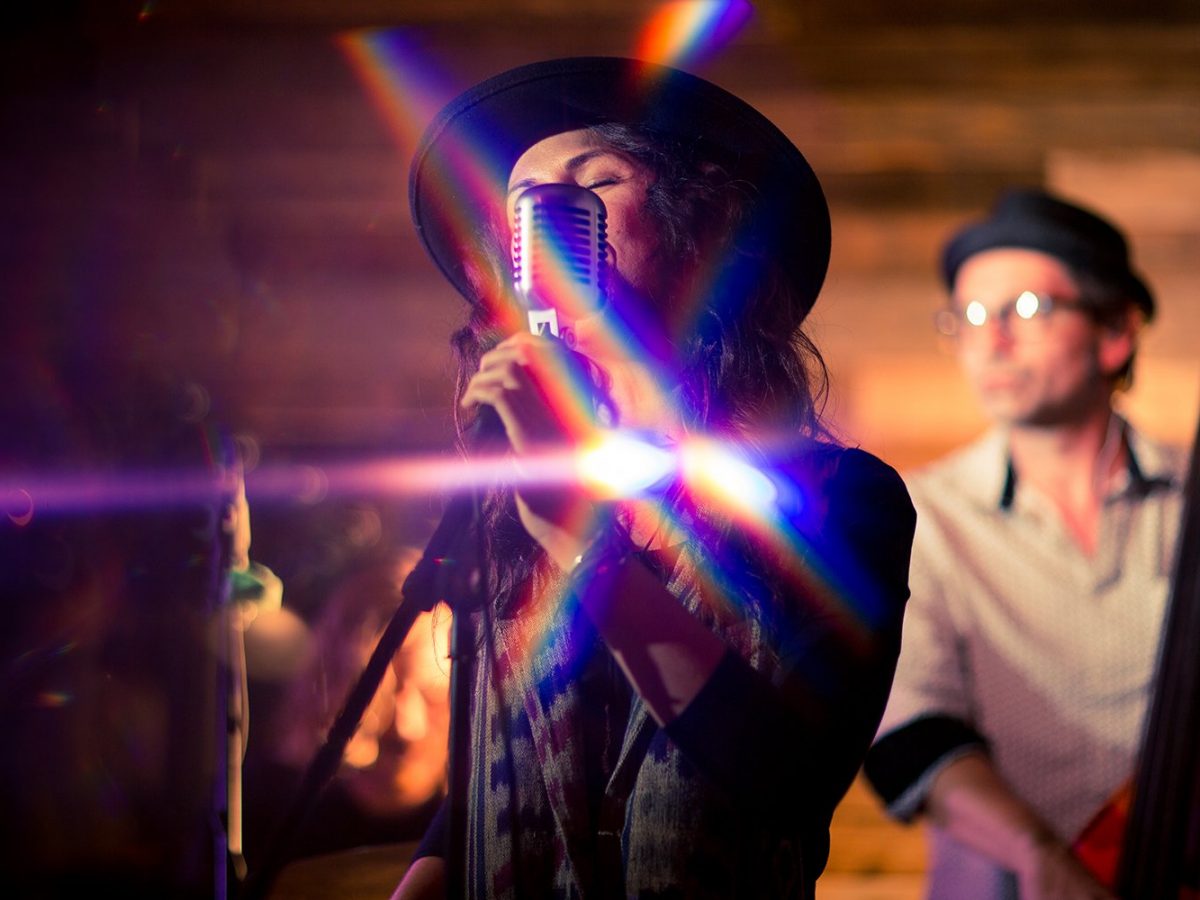 You’ll want to capture more than just 1 view of the show if you can.  If you’re stuck in one place or can’t move around a lot, having multiple lenses or focal lengths will add variety to your images.

Focal length refers to how long your lens is:  35mm, 75-200mm, 14-24mm, etc.  Having a combination of wide and tight shots will enable you to capture more details and more energy.  Even cellphones have the option these days of adding lens attachments to change focal length!  If you have a really long lens like an 85mm or up to a 200mm, that will help you get detailed photos from further away.  Not to mention, you might even get a clean shot of the drummer!

Using a wide angle lens, you can capture the entire band or make one person on the stage look elongated and larger than life.  Wide angle lenses tend to distort the image a bit which can create a fun look in concert photos.

Using Lightroom or Adobe Camera Raw, you can pull a lot out of your RAW images!

I do very little editing on my concert photos, but they all get some amount of sharpening, contrast, noise reduction, and color adjustments.  But sometimes, if the light was really BLAH and I didn’t get as creative adding my own lighting, I can create more visual interest in the photos by really playing with the colors in post.

Try changing the HSL slider or the Split Toning sliders and see how much different your photos look after a few adjustments!  And when in doubt, change it to black and white and really play with the settings to create a more interesting image.

I’d love to see how you put these tips into practice!  Tag me (@jesicasonphotography) in your concert photos if you found any of this helpful!

Shopping Basket
We use cookies to ensure that we give you the best experience on our website. If you continue to use this site we will assume that you are happy with it.Ok